As of 15th December 2011 the airfield at Cottesmore fell silent, with the based Harriers going into storage and later being disposed of, mostly to the US Marines for spares use and a tiny number for UK museums. The station disbanded at the end of March 2012 and became an army base. I will leave this guide up here in its final state for posterity.

Located North of Cottesmore village, 4 miles West of the A1, half-way between Melton Mowbray and Stamford. RAF Cottesmore is the home of Joint Force Harrier, consisting of 1(F) Squadron plus 800 Naval Air Squadron with their Harrier GR.9s and T.12s. 3 Squadron have become a Typhoon unit and moved to RAF Coningsby; IV(AC) Squadron have been renumbered as 4(R) Squadron and moved to Wittering as the OCU. Until early 1999 Cottesmore was the home to the Tri-National Tornado Training Establishment (TTTE) but with its closure became an exclusively-Harrier station. The RAF's other major Harrier station, RAF Wittering, is only about 20 minute's drive away to the South-East. 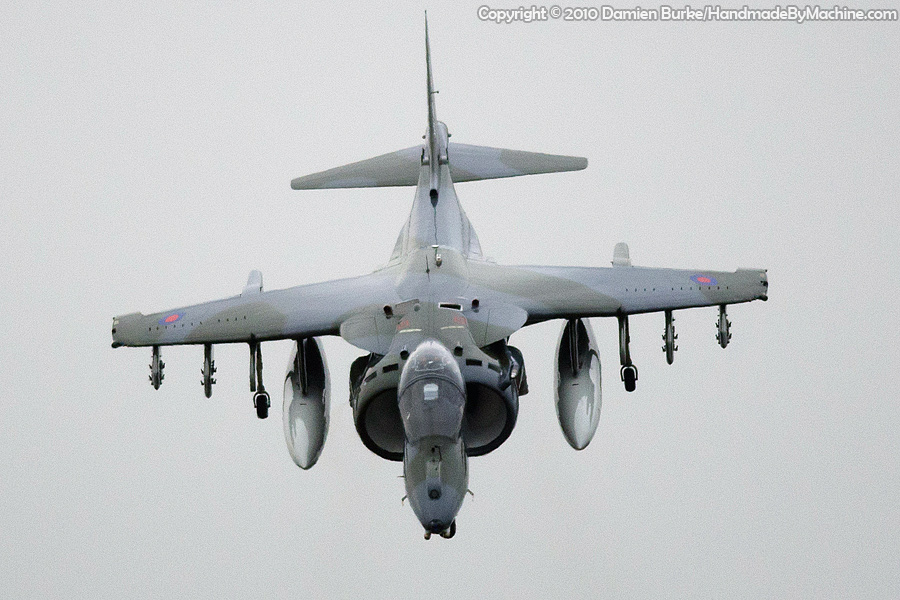 What you can expect to see

Harriers of the resident squadrons plus a limited range of visitors. I've seen Hawks, Jetstreams and USAF C-130s arriving or bashing about the circuit while Harriers kept the noise level interesting. Maybe I've been lucky but I've never had to wait more than 40 minutes or so before something arrived to do some circuits. In recent years however the Harrier force's workload overseas has meant things are quieter here than they used to be. With the drawdown of the Harrier, though, currently it seems the station is actually busier than normal with everybody trying to get some hours in!

Flying runs throughout the day but tends to taper off around 16:00 local (or just before dark); in the past there has been some night time activity on a fairly regular basis, it is reported that there will no longer be any night flying, nor flying on Fridays (a few Friday movements have occurred however, though these are very limited and it is not worth your while turning up on the off chance there will be some). Operations are currently only scheduled to continue until mid December 2010.

The only other thing worth seeing is the gate guard - return to your car and continue the road towards the station entrance; the Harrier GR.3 gate guard is visible down here (O - ask for photo permission at the guardroom), but it's a dead end for spotting - happily there's enough room to turn the car around at least! Continuing out of Cottesmore you'll be back on the road we started on, going in the opposite direction. Follow this and you'll go through Greetham and be able to get back onto the A1 (right on the roundabout for Southbound, straight over for Northbound).

Petrol/diesel is available at the garage in Cottesmore village, there's also a post office/shop in Greetham for basic refreshments - drinks, sandwiches etc.

Foreign visitors may wish to note that the A1 is sometimes signposted as the Great Northern Road.

Station security seem quite happy with spotters at Cottesmore and I've never seen them bother anybody except during RIAT in 2000 when the local police removed cars parked on verges and the MoD police asked people to move away from the runway end near point D (with little success - a USAF B-1B had greater luck in 2001!).

If you're at point A, Harriers making vertical landings sometimes orient themselves to point directly at you, bow, and then rotate to match the runway heading once more. Harriers often make approaches and (very occasionally) landings on the parallel taxiways; there are also two hover pads on the western parallel taxiway (marked with asterisks on the map) on which they practice vertical landings. There are no viewing locations that offer a clear view of the hover pads.